Home › Tutorials › KVM host with bonding and VLAN tagged Virtual Machines setup on Ubuntu 12.04
New on LowEndTalk? Please read our 'Community Rules' by clicking on it in the right menu!

Was brushing up my home lab setup. I like proxmox, however, when using proxmox everything is easy. Here's how to do it the hard way. 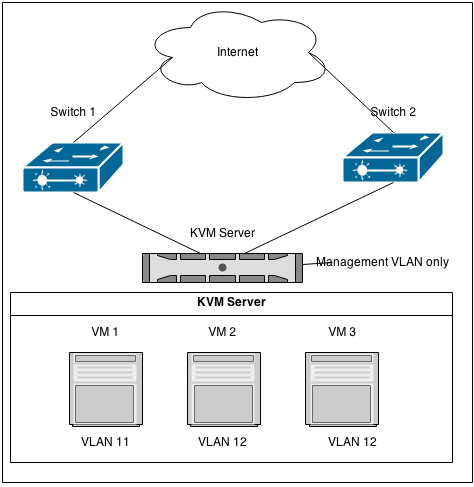 The KVM host has 2 NIC's, which are plugged in to two switches who support LACP. The switch ports for the KVM host are trunk ports for the above VLAN's (11, 10 and 12). The two NIC's are bonded in balance-xor (bond mode 3) for fault tolerance and load balancing.

We are going to create three interfaces using the linux vlan config, bond0.11, bond0.10 and bond0.12. We need to do this for the VLAN tagging.

On those interfaces we are going to create bridges for use with KVM: vmbr11, vmbr10 and vmbr12. Only vmbr10 will get an IP address, which we will use for connecting over ssh for management. The other two bridges only serve as bridges for the virtual machine nic's. Because we do it this way, it will appear to the virtual machines as if they were only in the network they are bridged in and they require no further configuration themselves.

We are using Ubuntu's vmbuilder to build a test VM. Instructions for adding a serial console for troubleshooting are also included.

This is an example situation to keep the tutorial simple. I actually use a environment-dmz, environment-frontend and environment-backend setup with corresponding VLANs.

You can check hardware virtualization support with the following command:

Your CPU is able to run KVM virtual machines.

Read on at raymii.org for the full tutorial