Home › Providers › How long do providers survive on LowEndTalk?
New on LowEndTalk? Please read our 'Community Rules' by clicking on it in the right menu!

How long do providers survive on LowEndTalk?

Not sure about whether anybody else cares about these numbers, but I was curios about how long the average provider survives on LowEndTalk and did some research. Maybe there is somebody else interested in these numbers, so here they are: 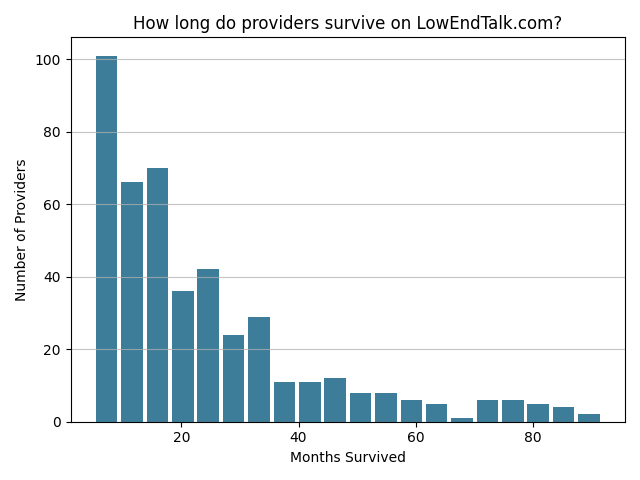 The above chart considers any provider inactive when a provider didn't post anything for over a year, but already had created at least two offer threads in the past. (Anybody not posting at least two offer threads is considered a provider which maybe just doesn't care about LET.) This way of classification is surprisingly overlapping with the non-200-status-codes returned when following the offering links.

All data was collected through a relatively naive crawler. Over 50% of the providers do not survive for 15 months, and after 31 months about 75% of the providers are gone again. Some other findings: I found 1323 providers and 1206 didn't post anything for over a year (my dataset goes back until 2012); a significant majority does offer VPS, while non-VPS providers generally survive longer (might be related to the sellers guidelines of LET); incorporated providers seem to give up less quick (well, was also to be expected); and WHMCS seems to have a nearly perfect monopoly on that market. 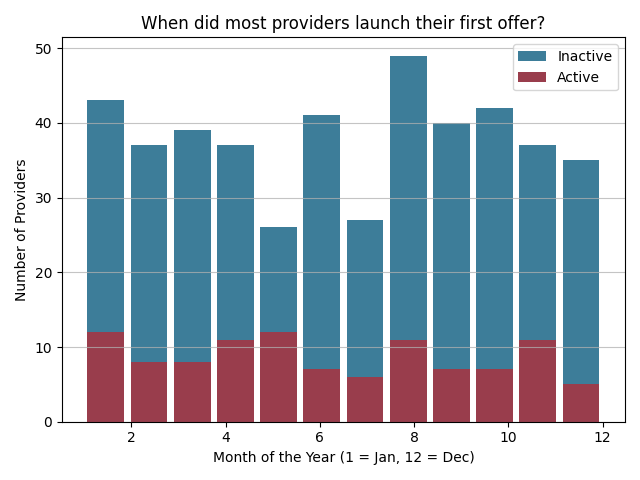 Against to what general LET wisdoms might say: there seems not the be any part of the year where most new providers appear and no starting month seems to give you a clear advantage in surviving. So, no summer hosts phenomenon. Or at least no statsitcally significant one.

To all VPS providers which are already in business for over 3 years: congratulations, it seems you have survived the hardest part (from a statistical perspective).