Home › Reviews › finalhosting.nl: chasing pavements
New on LowEndTalk? Please read our 'Community Rules' by clicking on it in the right menu!

In August, I subscribed to 4 Premium VPSes with FinalHosting.nl, run by @jordynegen11 who had a promo for I9-9900K.

I progressively took on:

Totalling about €185 in retail value (promo is roughly half), I was thrilled to see highly specc'ed virtual machines that I could run machine learning tasks on. This is equivalent to video encoding tasks some users run on their machines for work.

Btw, I anticipate people asking why not just get a dedicated or baremetal with that kind of a budget. I run on a docker swarm based computing framework which allows me to tag on additional nodes to suit the needs of the task.

The benchmarks via subscribers from the same promo thread faired similarly to my own, and I was quite excited to see that a fresh newcomer is ambitious enough to build his own panel, i.e. innovate against tried and true methods. This meant to me that at least at face value, this was an outfit that wanted to do well. In my book, anybody want wants to do well, I want to do business with.

Unfortunately, my experiences have been not just less than stellar.

I liked that finalhosting.nl has a network status page. That as well as a few posts from social media and here showed a major outage some time in May. With nothing much else, I thought uptime would be relatively reliable. 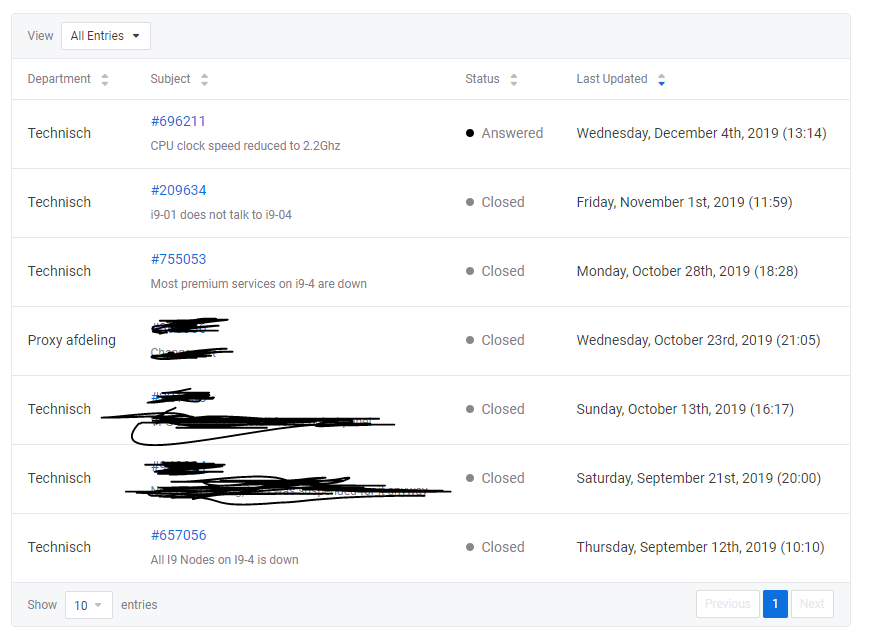 Unfortunately, Since my subscription in August, I have counted at least 3-4 network disruptions/issues. The worst being in November where there was >24 hour outage. The network status page, as well as their discord bot showed that "everything was fine" during this period. It was obviously not.

By this point, I had given up on writing a support ticket. It was one of those silent "monthly interruptions of service" that I'm sure @jordynegen11 hoped no one would notice, and I had to consistently try and catch. In contrast ExtraVM, who had a 61 minute downtime in November gave everyone (affected?) the month off even without an SLA.

In spite of the above, I was still rather tolerant of FinalHosting. The most I've done was request to shift all my VPSes into different nodes on their network so if one node goes down all my VPSes don't go along with it.

Even with the downtime, it could still suit some of my needs (just not all, including hosting websites) and I was still evaluating FinalHosting as a service provider.

But then a few days ago I found that all my Premium VPSes had been throttled. I thought maybe I had run my processes too heavily, though that had not been a problem before- and I am paying a premium for premium quality VPSes after all.

This new event infuriated me. Downtimes depreciate the money I spend paying FinalHosting and make it more expensive to continue with them, and now they are going to throttle me from 3.6Ghz to 2.2Ghz?! Even one VPS which I left idle for a long time was also throttled!

So I shot a hard (but not harsh) ticket to Jordy: 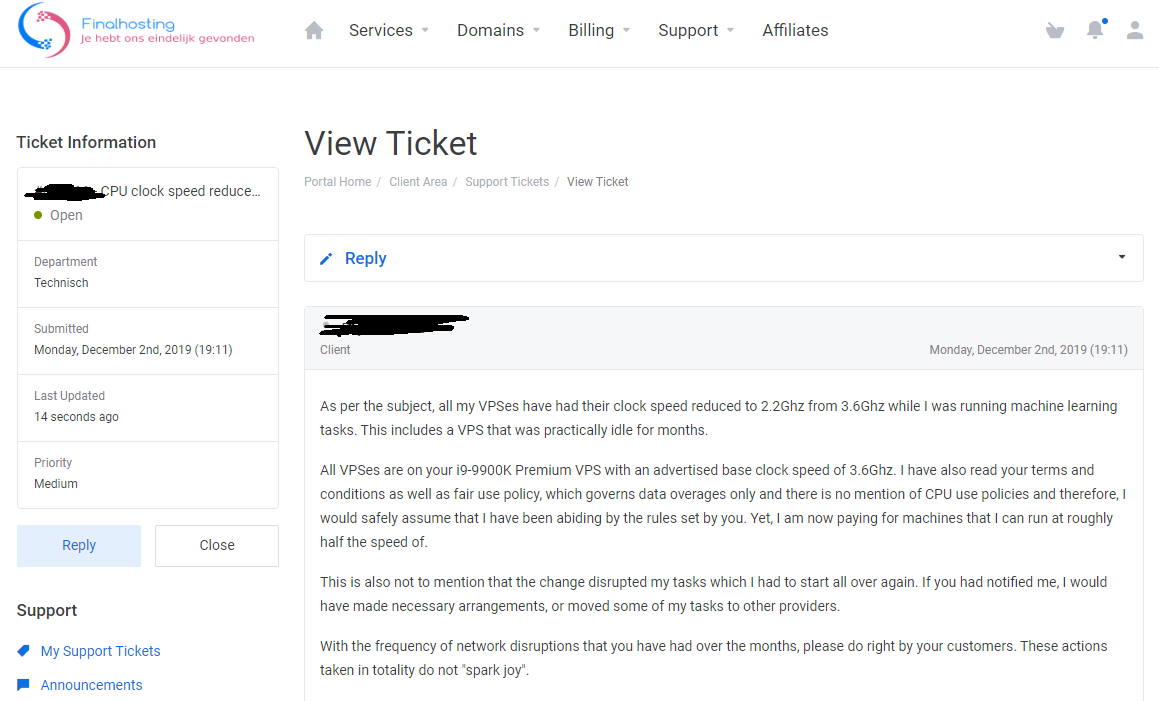 I realized later that the website had changed. The i9-9900K advertising at been mostly scrubbed from the main pages and the list of offerings no longer describe the i9-9900Ks. Looking into the control panel, it turns out I wasn't throttled. My VPSes were moved from the I9-9900K nodes to BLADE# nodes, where they run their lower tier offerings of who-knows-what. These ones don't even show the CPU model in terminal. Just some virtualized allocation. This would explain why the throttling was seemingly "account-wide", Jordy had downgraded me, without any communication, and keeping the same plan prices intact. I am now paying more, for far, far less.

After 2 days, Jordy still has not responded to my ticket. And I am left with assumptions about what he is doing with FinalHosting. If anyone is on the same Premium plan as me, please check your stats now.

I try to be respectful as far as I can be without being pushed around, and not once have I requested for compensation or credit. But this has clearly gone too far and I don't want to be paying to chase downtimes and now a new game- chasing the hardware that I rented.

Like I wrote in the support ticket. No one is telling you that the customer is always right, but that doesn't mean you shouldn't do right by your customers. They are the ones that keep your lights on.